As part of Sortir de l’écran / Spoken Screen, a series of performances and conferences on hypermedia works, Agence TOPO and NT2 presented Annie Abrahams (Montpellier), a Net art pionneer. She performed on Wednesday, March 26 at La Centrale and gave a lecture on Thursday, March 27, 2008 at UQAM.

The presence on the Internet, “a performance in the public space of solitude”
This Web artist is concerned with the relation of the public with the possibilities of collaborative work. She questions interpersonal relationships in a world increasingly mediated. According to Annie Abrahams, “any Internet presence can be described as a performance in the public space of solitude.” Her artistic approach interrogates the possibilities and limitations of communication in general but most specifically on the Internet. Born in the Netherlands, Annie Abrahams lives in France since 1987. She obtained both a doctorate in biology and a degree in fine arts. Her artistic practice incorporates video, installation and Web performances. Her Internet Project Being Human / Human Being , being developed since 1996, was presented internationally.
– http://bram.org
At Powerhouse on March 26, Annie Abrahams presented a performance entitled Le chœur souhaitant / The Wish Choir and a video projection of ViolenceS, at La Centrale on March 26, 2008. The artist invited visitors to read a series of wishes and desires that Abrahams has collected over the years through her website – http://bram.org/wishes.
Her stay in Montreal also included, on March 25, a collective writing workshop during which participants were invited to write around a common theme directly into a Web interface. During the second part of the workshop, participants have discussed about how this text could be performed or otherwise transmitted. The Montreal sound artist Kathy Kennedy was part of this workshop. Annie Abrahams’s stay in Montreal started with a performance, on March 20, at Oboro, for the launch of bleuOrange 00 – http://revuebleuorange.org, a literature webzine published by the Laboratoire NT2. 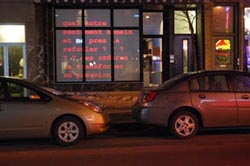 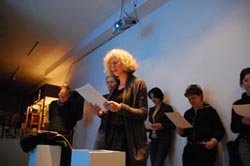 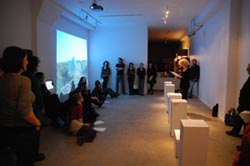