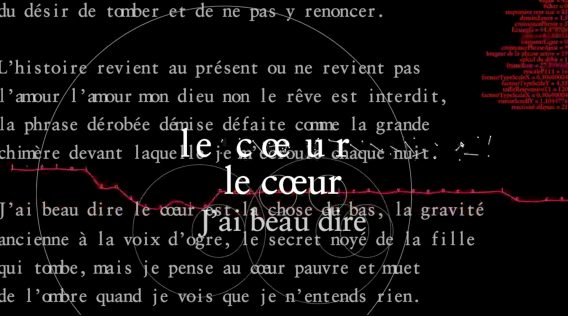 Simon Dumas. At the same time poet and artist, he has published five titles of poetry: Pastels fauves (Loup de gouttière Ed.2001), Petites îles de soif (Écrits des forges, 2003), La chute fut lente, interminable puis terminée (La Peuplade Ed., 2008) – finalist for the Alain-Grandbois prize – as well as Mélanie (2013) and Révélations (2016) at the Éditions de l’Hexagone. He has accomplished a writing residency in Mexico City in 2010 and another in Paris in the fall of 2014. He is co-founder and artistic director of Productions Rhizome whose mandate is to produce literary shows. He lives and works in Quebec City.

Mickaël Lafontaine. Multidisciplinary artist, his creative universe is at the crossroads of the real and the digital, of art and social. His artistic practice is based on video art, video-mapping, dance, poetry and philosophy. He uses video projection and interactivity to embody digital in the real world and make it live in the hands of the viewer. In parallel, he develops co-creation projects in educational and associative environments where art and new technologies become factors of social change. He lives and works between the cities of Nantes and Montreal.

The work is taken from installation Choeur(s) pour castelet. The project is basically born of an installation whose heart is made of poetry. In the window, in the center of a small black tray, stands a number of characters. It is the inhabitants of a particular castle, men and women, who challenge the visitor. They are poets from Quebec and Belgium. Delayed poetic presences and reduced to the proportions of the castelet, which presents original texts and their authors, each associated with an audio artist. A video creation designed specifically for the device is added to each duo, as well as a dynamic typographic animation created by the artist Mickaël Lafontaine, who uses a tool-work he has developed: the Audiographe. The poet’s voice modulates the typographic animations created.

Choeurs (s) is an installation of variable configuration and a tablet application developed with the collaboration of the artist and developer Louis-Robert Bouchard. A Rhizome production presented by TOPO  with the support of the NT2 Laboratory and the Mobile Literature Research Group.