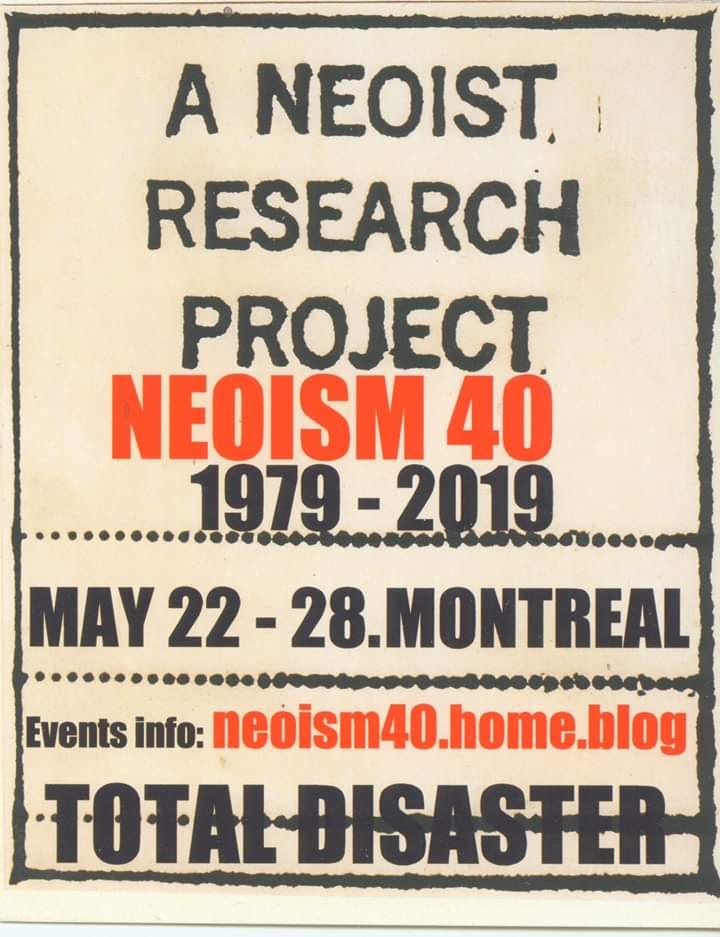 Information is available on social media and here:
Neoism40.home.blog

Tribute to the memory of Marton Krosznovski

TOPO welcomes the opening night of a series of events celebrating the 40th anniversary of Neoïsm, an artistis movement which emerged in Montreal in 1979 as part of the local new wave/punk rebellion and almost overnight erupted into an international conspiracy.

The idea was conceived by Istvan Kantor, a Hungarian refugee, freshly arrived to Montreal from Budapest via Paris. Kantor was joined by a bunch of young subversives and together they kicked out a series of street events and apartment festivals. Neoism spread like fire, and, throughout the 80s and 90s, from a minor local art movement it progressed into one of the largest anti-authoritarian communication networks around the world.

Held from May 22 to 28 2019, the program shapes as a series of actions, performances opening at TOPO on the evening of May 22, and in many other locations such as La Plante, Sotterena, as well as in the streets. 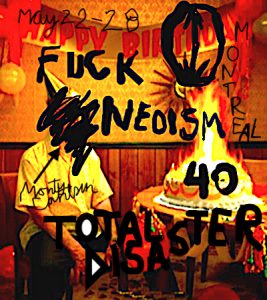 Sofian Audry creates computational artistic works through different forms such as robotics, electronics interventions, interactive installations, and internet art. He holds a bachelor’s degree in Computer Sciences and Mathematics (2001), a M. Sc. in Computer Science from the University of Montreal (machine learning and language modeling, 2003), an M.A. in Communications from UQAM (interactive media, 2010), and a Ph. D. in Humanities from Concordia University (2016).

Istvan Kantor became interested in rebellion and radical artistic experiments at a young age, staging underground happenings, performances, and exhibitions under an Eastern Block dictatorship. Multidisciplinary artist, his practice includes media art, performance, installation, sound art, robotics, writing, and music. His video works have been recognized throughout the world, and have been presented at numerous festivals, including Documenta 8 (1987), the International Short Film Festival Oberhausen (1992), Transmedial, Berlin (2001), and Osnabruck European Media Arts Festival (2009). In 1998, Kantor received the Telefilm Canada award for best Canadian video; in 2004, he won the Governor General’s Award in Visual and Media Arts—the highest accolade attributed in Canada to an artist in recognition of their contribution to the visual and media arts (biography written by Etienne Desrosiers).