Transposed for online dissemination with TOPO, On the Border is a proposal by artist Michel Huneault who documents a segment of the Canada-United States border and puts it through a narrative.

With each visit, the user has a unique experience of the body of work: 60 images and 60 oral histories are paired and sequenced randomly in an infinite chain of associations. In addition to the social and political issues raised by the work, this project offers the viewer a participatory experience in the critical act of editing and constructing different meanings from the same visual and textual elements. 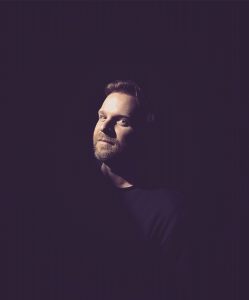 Michel Huneault is a documentary photographer and contemporary visual artist. His work focuses on issues related to development, trauma, migration, and other geographically complex realities, including the impact of climate change. His artistic practice brings together still images, oral histories, video, and immersive elements, leading to projects with both humanist and aesthetic dimensions. Not only informative, his work also calls into question the act of documentation and representation.

Michel has a master’s degree from the University of California Berkeley, where he was a Rotary Peace Fellow studying the role of collective memory after large-scale traumatic events. Before devoting himself to photography full-time in 2008, he worked in international development for more than a decade.

His long-term project on the Lac-Mégantic train disaster won the 2015 Dorothea Lange-Paul Taylor Prize and was published the following year by Schilt Publishing in a book titled The Long Night of Mégantic. In 2016, the Travers Fellowship enabled him to deepen his research into migratory issues, working across five countries, in collaboration with members of their diasporas in Canada and their families in their countries of origin. In 2018, he adapted Roxham—his photographic and binaural sound project about asylum seekers crossing the border from the United States to Canada—into a virtual-reality experience with the National Film Board of Canada. In the spring of 2020, the McCord Museum commissioned him to document the impact of Covid-19 on Montreal.

From April to August 2020, there was a 95% drop in land traffic of all types of travellers into Canada, compared with the same time period in 2019. The border was closed in response to Covid-19. In the country’s modern history, the border has never been as closed and hermetic for people, particularly the most vulnerable. It’s an invisible wall yet very real.

Here, not so long ago, Canadian and American neighbours knew each other on a first-name basis, had drinks together, shared land, and crossed the border while waving to the customs agent without even stopping the car. Not anymore. Already, after September 11, 2001, an increase in security measures and a change of tone at the border started rapidly eroding the relationship. In 2010, the new requirement of a passport to cross the border further complicated the neighbourly relations. The arrival of Trump in 2016 accelerated the territorial and ideological divide, and the onset of the pandemic almost finalized the isolation of the two neighbours. Essential goods, business people, hockey players, and the unstoppable snowbirds are still crossing, but most refugee claimants cannot.

In March 2020, before Covid, 930 individuals requested asylum between two ports of entry at the border in Quebec, such as at Roxham Road. In April 2020, only one person crossed. Through the end of August 2020, a total of 90 people crossed between ports of entry in Quebec (126 total for all of Canada). Moreover, since April 2020, Canada has been sending asylum seekers back to the United States, which goes against the right of asylum and sets a worrying precedent.

While doing an artist residency at the Adélard centre in Frelighsburg in the fall of 2020, I began documenting a short section of the border along the 45th parallel, between Lake Memphremagog and Lake Champlain on the traditional and unceded territory of the Abenaki people. The border in the area is arbitrary, discreet, and often unmarked. It can be completely invisible, hidden among culs-de-sac, soybean fields, residential backyards, forests, orchards, and undisciplined rivers. You feel your way along with a strange sense of guilt, nervously searching for subtle signs indicating a change of country.

Each time I went back to my studio, I marked a black square on the photos, like a three-dimensional Post-it, to remind myself where the border was. This simple, precise act—repetitive and clerical—accidentally but significantly transformed the image. The sanitary, political, social, and humanitarian screen stood stoically in the calm, natural landscape. When the border reopens, how will we have changed?